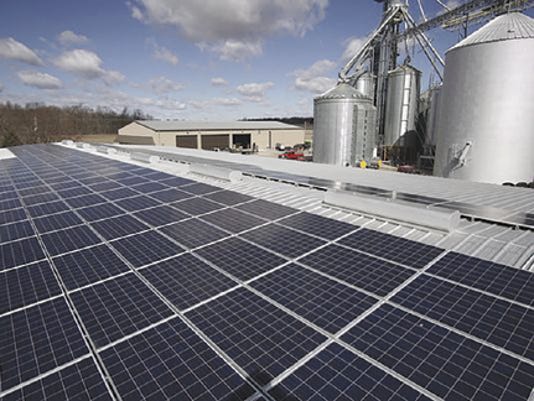 CRESTLINE, OH -- "In all honesty, I have to admit that we thought it was a joke at first," Rick Niese said of the 200 solar panels adorning the roof of one of his barns at Niese Brothers Farms, a sprawling agricultural operation north of Crestline in Crawford County.

"Everything they said, we thought it was kind of a joke in a sense, but it's not. It is for real."

Niese's fields are situated in some of the choicest agricultural land in north central Ohio, but they're also square in the middle of what's quickly becoming prime territory for the energy sector as well.

The proposed Rover natural gas pipeline is slated to run just 3 miles north of Niese Brothers' headquarters, and its employees would be forced to farm over it in many fields. And the operation would be at ground zero of the Black Fork Wind Farm, first proposed five years ago but yet to get off the ground.

It's solar energy, however, that's making real inroads into the farming communities of the region today, and as far as Rick Niese is concerned, the reason is simple.

"Actually, we forget that we have them. I thought we would see a glare from the road. There is no glare. They're not reflecting, they're absorbing. No muss, no fuss," he said.

"My dad and I were talking about this the other day. We wish you could go around and do this and actually forget about the windmills, because you don't even know it. The windmills, you've got them out there in everybody's face, everybody sees them. We really like the idea of solar versus wind."

Apparently, they're not alone. Ecojiva, a solar-panel firm based in Troy, Michigan, is just one of several such companies busy installing solar panels at farms across north central Ohio, but it's arguably been the most active in this region.

Burkhart Farm Center -- which services agricultural producers in Crawford, Marion and Morrow counties, and beyond, from its operation west of Galion -- is, with Ecojiva's help, about to go solar in a big way, with a 135-kilowatt system that will be a combination of rooftop and ground-mounted arrays.

Though Ecojiva isn't the only company putting down solar panels across the state, its focus on farm and rural applications is unique to this region. In the past two years, the company has installed more than 30 solar arrays of varying size across 10 counties in the northern part of the state.

"One reason you're seeing a lot of development in agriculture is because of the grants and tax credits available. A tax credit covers 30 percent of the cost and the REAP grant (part of the U.S. Department of Agriculture's Rural Energy for America Program) 25 percent, and that's a big difference," said Eric Romich, leader of the Ohio State University Extension's Energize Ohio program.

"Another reason they're the ideal hosts for solar is that quite often they're using a lot of electricity to dry grain, fan livestock or they have coolers for produce. Also, farms have a lot of space," said Jess Ennis, a senior director in sales and marketing for Ecojiva, said.

"There are environmental and independent aspects to this, but for most, the behavioral change is motivated by economics," Romich said.

Niese has seen his solar panels produce anywhere from $5 to $45 of energy a day, depending on the weather and time of year.

"You can't make money doing this. The idea is it zeroes out at the end of the year, so it's being accumulated. If we're making $45, $50 a day during the summer, we're stockpiling, we're banking dollars. In the winter, we could be down in the single digits per day, and we're extracting dollars then," he said.

"As of now, we've never received a power charge since we've put these in, so everything is apparently doing what it's supposed to. If we had to do it again, we would do it. I've talked to people who said, even if there was no help out there with the government, they would still do it."

Romich emphasized that he's very supportive of the surge in solar energy rushing through this part of Ohio, but he cautioned that farmers need to think seriously about all the obligations incumbent upon them once they have solar panels installed on their property.

"When you receive money like that up front you have obligations. There will be language in the contract that you're operating a generation system -- although, for most people, that's not a deal-breaker. You need to assume there will be insurance costs. You might want to have legal counsel to look at the contract. Grants and credits are taxable income, so you better contact an accountant, too."

Ennis said most of Ecojiva's solar installations pay for themselves in four or five years.

And while the REAP grant is competitive, now might be a good time to apply for one. Last year, the USDA awarded $12.3 million in grant funds, but this year, the budget has soared to $80 million.

"We're a full-service turnkey operation. We take care of all aspects of the system, from permitting with the utility to writing the grant proposal to design and installation, and then we monitor it 24/7," Ennis said of Ecojiva, which so far has developed more than a million watts of solar power for farms and rural businesses in north central Ohio.

Nationwide, the amount of electricity generated by solar and wind energy is far, far behind that coming from coal, according to the U.S. Energy Information Administration. But last year, the percentage of solar electricity shot up by 103 percent over the year before, compared with 8 percent for wind.

"The No. 1 country in the world in solar energy is Germany. Northern Ohio has 20 percent more solar radiance than Germany," Ennis said.

Rick Niese, who's still waiting to get his first electricity bill since having his company's 200 solar panels installed, isn't laughing any longer.

"As Americans, we're getting tired of depending on other countries. God gave us wind and God gave us sun, and there's nothing being about it, and we're paying all these guys overseas for all this oil," he said. "Let's take care of ourselves."