The study included a time of very high commercial fishing followed by a ban in southern Lake Michigan. 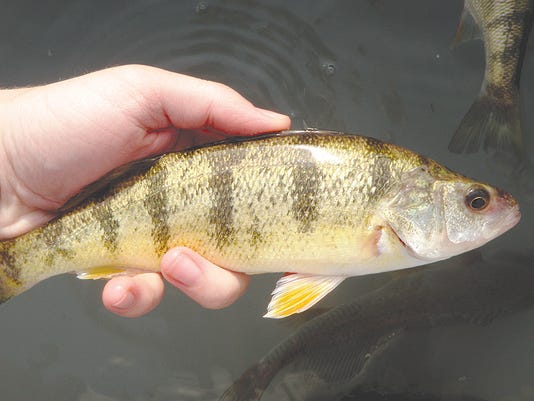 Purdue University researchers were surprised to learn in their study of yellow perch that the species recovered from overfishing in Lake Michigan to reach reproductive maturity at a later age and larger size must faster than what scientists had believed was possible.(Photo: Purdue Department of Forestry and Natural Resources photo/Leah Zoe Almeida)

WEST LAFAYETTE, IN -- Over-fished yellow perch in Lake Michigan have recovered much quicker - by hundreds of years - in reaching reproductive maturity at a later age and larger size than scientists previously thought was possible, according to a Purdue University study.

Analysis of fish assessment data going back to the early 1970s showed the species reversed a trend of reaching reproductive maturity at an earlier age and smaller size than what had been normal. The study period included a time of very high commercial fishing of yellow perch followed by a ban on commercial fishing in southern Lake Michigan.

Researchers have long suspected that size-selective fishing - in this case, catching only big yellow perch - can lead to "reverse evolution," in which fish become genetically programmed to mature earlier and smaller and, consequently, produce small fish.

"Every expectation was that recovery would take a super-long time," said researcher Tomas Höök, associate professor of fisheries biology in Purdue's Department of Forestry and Natural Resources and associate director of Illinois-Indiana Sea Grant. "But we saw that maturation traits of perch in Lake Michigan recovered very rapidly - in a couple of decades."

"Fish evolved over thousands of years to mature at a certain age," Höök said. "And now with really intensive fishing, that selection - that pressure - is much greater over a shorter time than anything that the fish had evolved under."

He said researchers believed it could take hundreds of years and perhaps millennia for the fish to evolve back to their later maturation age. This belief was based on the notion that the selective pressures favoring delayed maturation are much weaker than the pressures exerted by intensive fishing.

Researchers analyzed yellow perch development based on data from stocks in southern Lake Michigan, Saginaw Bay in Lake Huron, southeastern Lake Huron and the western and central basins of Lake Erie. Yellow perch in Lake Erie were continually fished, unlike those in Lake Michigan, and showed little change in maturation patterns.

The researchers did not draw firm conclusions about specific reasons why the fish recovered so rapidly in Lake Michigan; instead, they could only speculate.

Höök said the rapid recovery was a special case partly because, compared with many other harvested species, yellow perch reproduce at a relatively young age and have a relatively short life span; therefore, generations can evolve faster than longer-living fish.

It also is possible, he said, that perch from different parts of the Lake Michigan ecosystem mixed, providing enough genetic variability to promote fast recovery. That would be less likely in an "isolated" fish population that might have limited genetic variation.

Despite rapid recovery of maturation traits in this case, Höök said over-fishing can have a "potentially problematic" evolutionary effect on a variety of species. "The fish won't be able to grow as big as they used to be able to grow," he said. "So fisherman will likely catch smaller fish."

Data analyzed in the study came from departments of natural resources in Indiana, Michigan, Ohio and Ontario, Canada, and Ball State University. Lead author Zachary Feiner, a doctoral student, said analysis of the long-term data sets is one of the best ways to study the responses of fish populations to commercial fishing or changes in the ecosystem.

"The evolutionary effects of fishing and the best responses to such change have been debated for years," he said. "This study shows that, with rapid and sufficient management of heavily fished populations, it is possible for them to recover surprisingly quickly."

No funding external of Purdue was used for the data analysis study, but various funding sources have supported the long-term collection of data on yellow perch.

The complete study, published in Evolutionary Applications, is available online at http://onlinelibrary.wiley.com/enhanced/doi/10.1111/eva.12285/.