At the age of 73, Wally Huggett spends his "retirement" tending the state's largest cranberry farm. 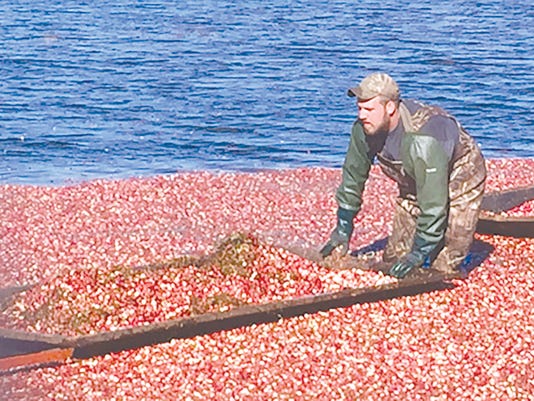 A worker skims cranberries from a flooded bed on the first day of the 2015 harvest at Michigan Cranberry Company.(Photo: .) 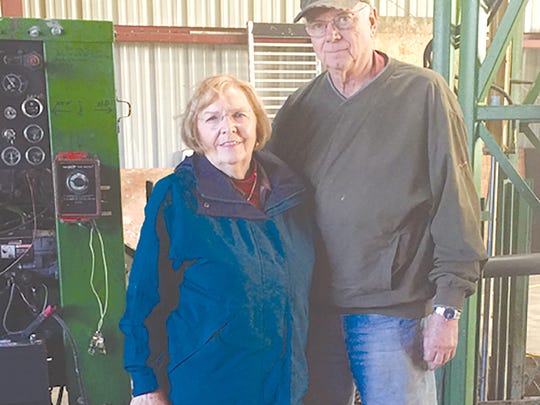 CHEBOYGAN, MI -- Some retire to scenic northern Michigan for a simple life of leisure. But at the age of 73, Wally Huggett—rather than playing golf—spends his "retirement" tending the state's largest cranberry farm in a remote section of Cheboygan County.

"Why would I want to do that?" said the patriarch of Michigan Cranberry Company when asked why he's not chasing Titleists around at this stage of his life. "I used to walk around on grass all day long when I had a sod farm in Sanilac County. I know a lot of guys up here who play golf, but I've got no interest in that.

"I'm enjoying this a lot," Huggett said of growing cranberries. "The definition of retirement is doing what you want, right? I'm doing that here."

Huggett and his wife Sharon operate Michigan Cranberry Company on an 800-acre parcel of land they struggled to locate June 11, 1985—the couple's 25th wedding anniversary. It took a flyover by Wally, who's also a pilot, to find the abandoned peat-mining operation that summer.

"We didn't find it that first day," Sharon said with a laugh about searching for the land on their silver anniversary. "Wally flew over it and got a look at the site. The Huggett family has always sought out different crops—specialty crops."

"We purchased it on the courthouse steps in 1990, on the day it was supposed to revert back to the state of Michigan," Sharon said. "It took us three years to clean up the site. We didn't do our first planting until 1993."

Once planted, it takes about five years to produce a crop of cranberries.

Today, Michigan Cranberry Company produces about three-quarters of the state's crop. The Huggetts' operation accounts for 220 of the 300 total acres devoted to the crop, statewide. They raise five different varieties across 45 separate beds—each about five acres—producing 3 million to 6 million pounds of cranberries annually, depending upon conditions.

Berries are dried, processed and graded on-site before being marketed under the Michigan Cranberry Company name (inside the state) or Great Lakes Cranberry Company name (outside Michigan). They also has an exclusive contract with Ocean Spray, encompassing 15 of its beds and directing approximately 850,000 pounds of cranberries to the well-known juice maker every year.

This year's harvest began Oct. 1 and will continue through the first half of November.

"I can't go any later than Nov. 15," Wally said. "That's when I lose all my guys because it's when deer season opens."

The spectacle of cranberry harvest has resulted in popular bus tours—often sold out—organized by the Cheboygan Chamber of Commerce for both adults and local school children. Visitors see what looks like Ocean Spray television commercial come to life before their eyes.

First the beds are flooded with a shallow layer of groundwater pumped from one of several stations located around the farm. A small tractor with balloon tires treads lightly over the beds while a vibrating attachment dislodges the berries from stems Wally says are "about the thickness of two human hairs."

Then the beds are flooded some more, prompting the berries (each of which has four hollow chambers inside) to float to the surface. Wader-clad workers gather the berries with long booms before they're loaded onto trays and dumped into heavy haulers.

"The good berries are the ones that float," Wally said with a smile.

It's been 25 years since Wally and Sharon sold that Marlette sod farm to their son Mark. They had originally tried growing cranberries there, but the soil pH in the central Thumb made it a fruitless endeavor.

Married 54 years—and Farm Bureau members for nearly that long—the Huggetts' passion for their cranberries is as evident as the bond they share as husband and wife.

"I'm really romantic about it," Wally said, agreeing with his partner that it couldn't likely have turned out better.

"He calls this his retirement hobby," Sharon said of her not-so-retired husband and his tireless, sunrise-to-sunset routine. "He says he gets up every morning, thanks God he's alive, and he goes to work."