The members of the two cooperatives voted March 7 to approve the merger, which will take effect Sept 1. The resulting co-op will have more than 7,000 members and nearly $900 million in annual sales, making it the largest in Ohio, one of the top three in the Midwest and one of the top 10 nationwide in size, Secor said.

In the weeks since the March 7 vote, a 12-member board was named and voted to continue under the Sunrise Cooperative name, with Secor remaining as CEO. In late March, Trupointe announced the retirement of its CEO, Larry Hammond, and its vice president, Gordon Wallace.

The new Sunrise co-op will have 40 facilities based in north central Ohio and southeastern Ohio, plus several in Indiana.

Although mergers are nothing new for Sunrise, which has grown through previous co-op mergers over the past 15 years, the one with Trupointe is on another level.

“This one is a totally different merger,” Secor said, noting that many mergers are the result of financial issues being faced by co-ops. “This one is about the big macro world.”

Trupointe and Sunrise both were financially healthy and have similar member services, including grain, feed, energy and agronomy (fertilizers and pesticides).

As agriculture heads into tougher times after a five-year boom, Secor and others foresee more consolidations among co-ops and the corporations that produce chemicals and seeds needed by farmers.

He said it was in the best interest of the co-op membership to be of a size that the major seed companies and chemical manufacturers will notice.

“We need more tons of grain to represent,” he explained.

The larger cooperative also can have an impact on imports and exports, which also is key in the agriculture industry.

Although the merger will not be official until Sept. 1, Sunrise's growth is already being noticed by ag manufacturers, Secor said. "The phone has been ringing off the wall.”

“The job between now and Sept. 1 is to get all the business units reorganized,” he said.

During the past decade, Sunrise has consolidated and trimmed its operation to under 10 locations with a 28-million bushel storage capacity in northern Ohio — with one of its largest facilities located in Clyde.

The local cooperative also has more than 3,300 members. Currently, Sunrise serves farm operations in about a dozen counties, including Sandusky, Ottawa and Seneca. The cooperative’s region stretches west to Pennsylvania, south to Mansfield and east to I-75. Sunrise also has aggressively updated its facilities, with technology reducing the needed manpower. Another key factor in Sunrise’s growth was being able to quickly handle unit-trains at its plants, filling 85 rail cars with grain in 10 to 11 hours instead of days.

Trupointe has nearly 4,000 members and 24 locations in 34 counties in southeastern Ohio and northeastern Indiana.

Secor emphasized that both are strong cooperatives, and Trupointe reported numerous upgrades to its facilities in its 2015 annual report.

Secor said the merged cooperative will continue to change and update in the future.

“The footprint has got to change and become much more efficient,” he added. “There are facilities that are going to have to close.”

Secor said that although there will continue to be two corporate offices — one in Fremont and one in Piqua –— he will be spending most of his time now in Piqua to learn the operations of Trupointe. 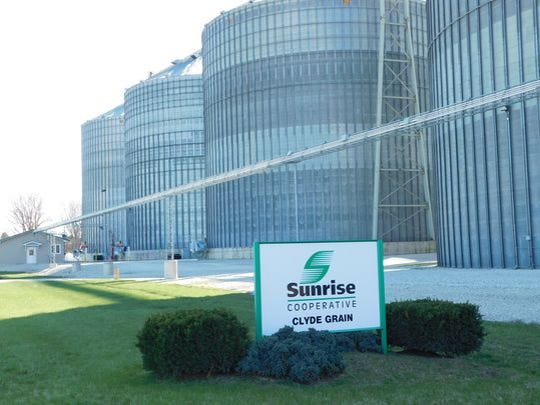