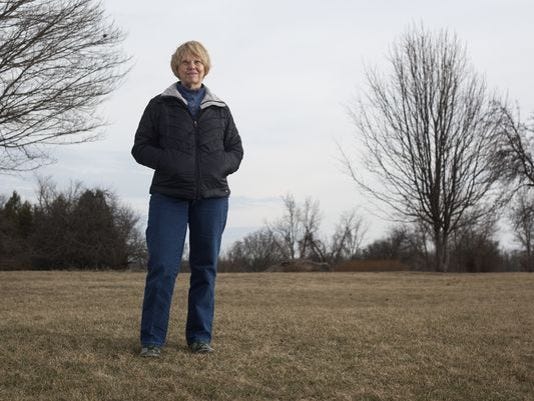 Sue Deer Hall poses for a portrait at her home in Grand Ledge. Hall lives next to a portion of up to 500 acres were Geronimo Energy, a Minnesota-based company, is interested in constructing a solar array.(Photo: Julia Nagy, Lansing State Journal)

Sue Deer Hall's house on East Strange Highway sits on five acres west of Grand Ledge that's been home to her family for six decades. It still borders farmland her parents used to own — 95 acres where crops, soybeans and corn among them, are still grown and harvested.

But Deer Hall is worried that could change in a few years if the development of a solar array on up to 500 acres of what is now active farmland in Oneida and Benton townships gets approval from township and county officials.

Active farmland isn't something Oneida Township can afford to lose, she said.

"I'm not against solar but there are places for solar," Deer Hall said. "I think it's important to realize that farmland is important. When you lose farmland it's gone forever. This is a rich agricultural neighborhood."

She isn't alone with her concerns. Neighbors and township officials say they don't know enough about what Geronimo Energy, a Minnesota-based solar and wind energy company, is calling "Sandstone Creek Solar Project."

In an email to the State Journal Lindsay Smith, a spokeswoman for Geronimo Energy, said the solar array development will generate between 50 and 75 megawatts of renewable energy, enough to power more than 12,000 homes a year, wrote Geronimo's Project Manager for Michigan David Shiftlett, in a letter sent to adjacent property owners.

Smith said the project is still in a "preliminary design phase," and declined to say how many panels would be part of the project.

"Geronimo anticipates Sandstone Creek will enter operations sometime between 2019 and 2020," she said in the email.

Smith did not respond to inquires about the cost of the project.

The company has obtained contracts to purchase the land, she added. It's located near a transformer substation off Oneida Road that's owned by ITC where electricity passes to Consumer's Energy. Smith said that was a factor in Geronimo's interest in the land.

Terry DeDoes, a spokesman for Consumer’s Energy, said the company isn't actively seeking bids for renewable energy but that doesn't prevent the submission of them from interested parties. Consumer's doesn't comment on pending contracts, he said.

Geronimo confirmed preliminary plans for a 50-megawatt, 100,000-panel solar farm on up to 300 acres in Bingham Township near St. Johns in January, but hasn't submitted any site plans for "Sandstone Creek Solar Project" to either Oneida or Benton townships yet.

It isn't the only company planning solar developments in Eaton County. Vermont-based company groSolar officials have said they will construct a solar array for the Lansing Board of Water & Light on more than 160 acres in Delta Township. The project is expected to power up to 3,200 homes.

Earlier this month Geronimo presented information about the project to Oneida Township's Planning Commission. Chair Mike Walters said the township has no ordinance in place to address solar developments, but early next month he said the commission will likely discuss whether they should adopt one.

"They are showing their interest," Walters said. "And we need to look at the possibility. Ultimately whether a solar farm went into the township would be up to the Board of Trustees."

Walters said the commission would be charged with making a recommendation regarding the project if site plans were submitted. He said they'd take into consideration what surrounding property owners want and the township's Master Plan.

"I really haven't made up my mind because we haven't heard enough," Walters said. "We don't know enough."

Benton Township Supervisor Roger Wickerham said he's aware of the project, 135 acres of which is located in his township. If it moves ahead he said Eaton County would make the final decision on those acres, but his board would submit a recommendation.

"My feeling is that this is very good farmland, and you hate to see it eaten up this way," Wickerham said.

In February Deer Hall and her neighbors to the west, John and Cindy Coakley, both got letters from Geronimo about the project.

John Coakley said he's "not excited" about the prospective of living next to the development, and is just as concerned as Deer Hall about the loss of healthy farmland.

Based on a map the company provided him, John Coakley said with the solar array would stretch nearly one and a half miles from east to west.

"It is huge," he said. "I think as neighbors we're looking for the township to uphold the master plan, which recognizes this area as prime farmland."

Deer Hall said for her family the prospect of losing nearby acreage to solar panel construction is "personal."

"I'm right on the edge of it," she said. "Surrounded on two sides by it. This is a very big project. It would be a major change to what's in Oneida Township's master plan."