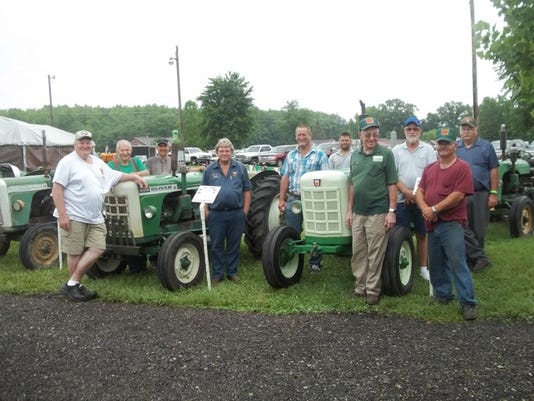 MADISON, IN -- Wind, rain and hot, humid weather couldn’t keep owners of Oliver 500s from bringing their tractors out for the 1st Gathering of Oliver 500 and 600 Tractors held June 22-24 at Madison, IN, in conjunction with the Hart-Parr Oliver Collectors Association’s (HPOCA) 2017 Summer Show.

The 500 and 600 models were actually “rebadged” David Brown, Ltd. 850 and 950 models of tractors manufactured for The Oliver Corporation in England in the early to mid-1960s. The only difference was that the Oliver 500s and 600s were painted Oliver green and clover white - as opposed to the typical David Brown colors. While the exact number produced is a topic for debate, most agree that there were approximately 2,000 500s shipped from the David Brown facility to the U.S. and considerably fewer of the 600 models.

Some tractors exhibited at the 1st Gathering of Oliver 500 and 600 Tractors were in their Sunday-best livery; others were in their work clothes - but all were a sight to behold! Lined up, the 13 tractors made quite an impressive display, created considerable interest from spectators and prompted lots of discussion among their owners.

J.R. Harris, representing his daughter Joy Harris, who is owner of an Oliver 500. (Photo: Courtesy photo)

While all the tractors at the gathering were 500 models, details on each gave an opportunity to see a variety of features. Some had original horseshoe-shaped drawbars. Some had various modified drawbars. Others had three-point hitches. Two were equipped with pulleys. Some had gas engines while other were diesel-fueled. Two were found to have brass clutch pedals - the rest had steel pedals. Several had after-market guards on the front to prevent hood damage. Among the group was a late 1963 production tractor with eight lug-bolt rear wheels and a pressed steel front axle instead of the earlier cast axle. This model also featured brake pedals that came through the the floor board rather than wrap around it, and had a two-speed power takeoff.

There is family history and sentiment associated with these tractors. Two are still owned by family members of the original purchaser. Several owners said that as a youth they learned to drive a tractor on an Oliver 500. Two owners even brought original purchase invoices to display. One exhibited the loan document outlining when annual payments were due. In addition to the tractors, several pieces of literature associated with Oliver 500 and Oliver 600 were on display. There were also maps of the United States, Canada and England with pins showing where Oliver 500 and Oliver 600 tractors that have been documented are located — green pins for 500s and red pins for 600s.

Oliver 500s owned by David McGuire of Ezel, Kentucky, Louis Frick of Bremen, Indiana, and Donald J. (Joe) Ridener of English, Indiana, had been featured in an article written by Chris Losey in a 2006 issue of the Hart-Parr Oliver Collectors Magazine.They and their tractors were reunited during the1st Gathering of Oliver 500 and Oliver 600 Tractors. Other exhibitors were: Darrel Ballinger of Paxton, Illinois; Joy Harris – represented by J.R. Harris of Alexander, Illinois; Jim Irwin of Paisley, Ontario, Canada; Nelson, LeCount, Wawaka, Indiana; Michael Patterson of Bedford.Virginia; Kieth Hiatt of Muncie, Indiana; Larry VanKirk of Fountaintown, Indiana; and Donald Wendel of Cedar Grove, Indiana. Also attending, but not exhibiting was Oliver 500 and 600 owner Frank Conroy from Surry, New Hampshire. Although not an owner of these tractors, Elmer Landman, editor of the David Brown Club of Canada magazine, and his wife, Leslie, came from Ontario, Canada.

Frank Conroy of Surry, NH, owns both an Oliver 500 and Oliver 600, but did not bring them for exhibit. (Photo: Courtesy photo)

Over time, McGuire, who owns two Oliver 500s, had assembled a list of about 12 Oliver 500 or 600 owners. At a HPOCA winter show in 2016, McGuire, LeCount, Irwin and a few others discussed the possibility of starting an official registry of serial numbers of remaining tractors from these two Oliver models, along with names and contact information of their owners. LeCount agreed to spearhead that effort, but it wasn’t until later that fall that he really started working on the project in earnest. As information began coming in, it became evident that the majority of owners who responded resided in the Indiana, Michigan, Ohio and Kentucky area.

Since the HPOCA 2017 summer show was to be held in Madison, Indiana, it seemed logical to incorporate a gathering of Oliver 500s and 600s as part of that event. Permission from the show coordinator and host club was requested and received. Publicity was started, letters were written to owners, a table was set up at the 2017 HPOCA winter show in Florida to promote it. Phone calls and visits to owners were made encouraging them to attend and bring their tractors.

With 13 Oliver 500s showing up, LeCount was thrilled. “I was overjoyed when the last two tractors showed up on Friday morning - making a baker’s dozen! The only thing that would have made it better would have been a 600 or a high-crop.”

“I’m glad this happened,” said Ridener. ”This is the first tractor show to which I have taken a tractor. It has been a wonderful experience.”

“I realize, after this experience, how important the Oliver tractor is to our survival,” said Dawn Kennedy,” a friend of Ridener.

Until recently, these tractors weren’t drawing much attention by collectors in the United States. LeCount now has over 60 Oliver 500 serial numbers and their owners in his registry and 15 Oliver 600s have been located. He is confident there are more to be found - and with renewed interest in these utility tractors from the 1960s, they are no longer regarded as the ugly Oliver step-children they once were!!