The epitome of a hardworking farmer

'Keep working until you can't do it no more'

The epitome of a hardworking farmer

MENDON, MI -- One of the stories that Rodney Taylor remembers is when a local barn was burning near where he grew up. There were animals in the building and the fire was out of control.
“My dad went into the barn and grabbed a calf,” Taylor said. “He’d come out and they would hose him down. Then he would go back into the fire and grab another calf. He would be steaming when he came out so they hosed him down again.”
It is those types of character qualities that Taylor grew up on so it isn’t a surprise to learn that in spite of being diagnosed with Fascioscapulohumeral Muscular Dystrophy (FSMD) in his twenties, he continued to work on the family farm for the next several decades. He learned early on that if he kept active it would be easier on him as the disease progressed. Unfortunately, it caught up with him but not without a fight.
“While my dad was running a pallet business, the doctors at the Muscular Dystrophy Clinic were baffled that he could even walk,” Taylor’s daughter Jessica Hempel said. “The MRIs showed that he did not have enough muscle for it to be possible.”
But possible it was and Taylor worked hard to keep his muscles strong. One of his proudest achievements was the development of weight lifting equipment that he could use even when he was on a ventilator and had a trach. The children recorded him using the machine and posted it to YouTube.com at http://youtu.be/wsbbn7y7aBw.
In his mid-50s, Taylor became wheelchair-bound after thirty years of defeating MD. The tenacity of this farmer is obvious in the video the children posted. But just as things began to settle into a new normal, another reality set in. In July of 2017, Taylor’s wife of almost 40 years, Susan, was diagnosed with Multiple Myeloma. Since the beginning of 2018, she has had intense chemotherapy and a stem cell replacement in Indianapolis, IN. The family was stunned.
“We were blindsided,” Hempel said.
Now the formerly active couple are needing 24-hour help for the various issues. A nurse is with them at all times and neither of them are able to work.
“Dad worked until about 10 years ago and Mom just quit working this year,” Hempel said.
When the family was farming, they grew grain crops, hauled hay and straw, sold firewood, raised beef cattle, and had the skid business. Coming from a farming family, Taylor remembers advice that his father told him.
“He taught me to keep working until I couldn’t do it no more,” Taylor said. “He said the longer I stayed active, the better I would be.”
Maybe the hardworking “good old days” were actually the best things that ever happened. Rod Taylor thinks so. 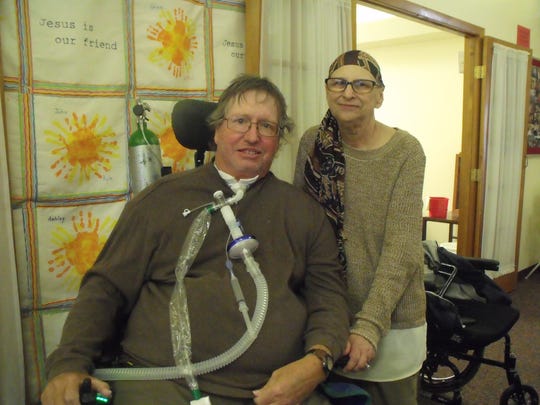 Many of the seats were taken during the recent Benefit Soup Supper held at the Mendon (MI) Methodist Church. (Photo: Julia Baratta)