LOUISVILLE -- Three teams representing Michigan closed their seasons with strong showings at the 2018 North American International Livestock Exposition dairy cattle judging contest in Louisville, KY, on Nov. 4.
Contestants in all divisions judged 10 classes of cattle, with youth competitors delivering oral reasons to explain how they placed cattle in four classes. Collegiate and post-secondary competitors delivered oral reasons in five classes.
Michigan 4-H’ers Shannon Good of Caledonia, Drew Neyer of Shepherd, Cristin Theisen of Mt. Pleasant and Katie Wilson of Blanchard competed in the youth division for 4-H and FFA members.
The 4-H team placed third overall and third in reasons out of 20 teams from across the country. Out of 78 individual participants, Neyer placed third and Good ninth in oral reasons.
In the individual breed classes, the team placed first in Brown Swiss, with Good taking third and Theisen sixth. In the Guernsey class, the team was fifth and Good placed seventh. In the Holstein division, both the team and Neyer were fourth, with Good taking eighth.
In reflecting on the experience, which was his first national judging contest, Drew Neyer said he was grateful for the opportunity. “It was an honor to compete at the contest. I know there are a lot of kids out there who will never have this chance. Being able to do well this year is just icing on the cake since it was my first contest. I was a little nervous going into it, but I had a great time with my teammates. I couldn’t have gotten to this point without the support and help from my coaches and parents.”
Competing in the two-year junior college team division were Gerrit Baker of Byron Center, Kristen Burkhardt of Fowlerville, Miriah Dershem of St. Johns, and Rebeka McDonald of Conklin. All four are students in Michigan State University’s Institute of Agricultural Technology dairy program and all are Michigan 4-H alumni.
The team placed third out of six teams. Baker placed sixth, Burkhardt seventh and McDonald ninth out of 24 individuals. In oral reasons, the team placed second, with each member placing in the top ten individual competition (Burkhardt fourth, Dershem eighth, McDonald ninth and Baker tenth).
In the individual breed classes, the team took fourth in the Ayrshire breed class, with Burkhardt placing seventh. Baker won the Brown Swiss class, while the team was second and Dershem was eighth. In the Guernsey class, the team was first, with all four individuals taking top ten placings (Dershem third, Burkhardt fourth, Baker ninth and McDonald tenth). In the Holstein class, Baker took first, Dershem seventh, Burkhardt ninth and the team was third. The team also took home fourth in the Jersey class.
“It was a great experience to judge with awesome teammates and I’m proud of how everyone competed,” said Kristen Burkhardt. “Knowing that this was the last contest of the season, it was fun to reflect on how each of us grew throughout the year and what we accomplished along the way.”
The four-year collegiate team representing MSU consisted of Cameron Cook of Pewamo, Madeline Meyer of Ionia, Makayla Petter of Hastings and Allison Schafer of Westphalia. Most of the team members are Michigan 4-H alumni, and all are seeking agriculture-related bachelor’s degrees.
Eighteen teams and 68 students competed in the four-year collegiate division. The team placed fourth overall and sixth in oral reasons.
Individually, Schafer was fifth overall and Cook was tenth in reasons. In the breed classes, the team won the Ayrshire class and Cook placed fourth. In the Brown Swiss class, Petter placed third and Meyer was fourth. Schafer placed third and the team took home fifth in the Guernsey class. Schafer also took home eighth in the Holstein class.
“As I stepped out onto the green shavings for the last contest of the season, I reflected back to the beginning of the summer,” remarked Cameron Cook. “My teammates and I have made great memories this year and now we look to what’s next, what is our future.
"Looking back, I’m proud not only of what my collegiate team has accomplished, but what Michigan dairy judging as a whole did this year. It is exciting to stand in the arena with passionate 4-H members and see the bright future they, and really all of us, have ahead. This couldn’t be done without the help of all our amazing teammates, coaches, parents, sponsors and everyone else who helped us along the way.”
Coaching all three teams was Joe Domecq, Ph.D., an academic specialist in the Department of Animal Science at MSU. “It has been wonderful traveling with the team members this fall, seeing how much they have grown and accomplished,” said Domecq.
“The students put in hours of work from July to November, throughout the week and during Saturday practices. They learn time management, decision making, critical thinking, and so much more that will serve them long after their time on a judging team is done. I’m very proud of all the teams from this year.”
Team travel was made possible by team fundraisers and donations from many sponsors. Major contributors to the state dairy cattle judging program include NorthStar Cooperative, ABS Global, the Michigan Dairy Memorial Scholarship Foundation, the Michigan Holstein Association, the Michigan Jersey Association, the Michigan Milk Producers Association, Michigan Farm Bureau and the Michigan Youth Livestock Scholarship Foundation Dairy Fund.
For more information about Michigan 4-H dairy programs, a program of Michigan State University Extension, contact Melissa Elischer by phone at 517-432-4306 or by email at elischer@msu.edu. 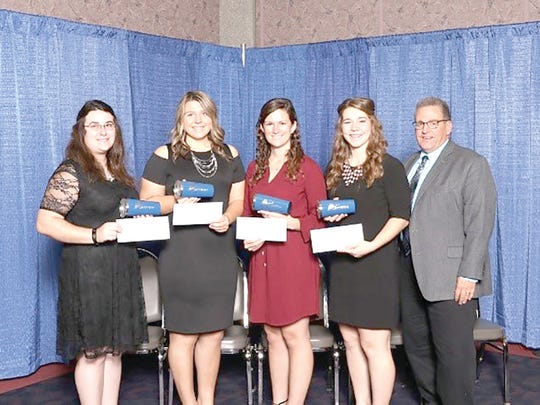