Michigan corn production, forecast at 270 million bushels, is down 9 percent from last year — the lowest for the state since 2004 if realized. 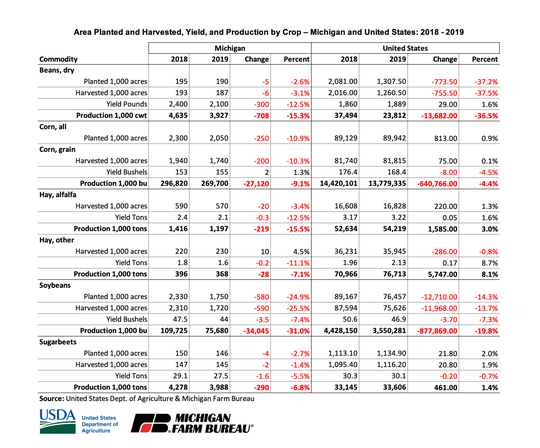 EAST LANSING, MI -- As Michigan farmers head to the fields between unrelenting rainfall events, many unfortunately will discover new record-low yields, if projections in the latest USDA October Crop Production Report for the state are realized.

Based on conditions as of October 1, USDA’s National Ag Statistics Service (NASS), says Michigan farmers will be bracing for a rough harvest, due to extremely variable crop conditions, wide-ranging stages of crop maturity and muddy fields.

Michigan corn production, forecast at 270 million bushels, is down 9 percent from last year — the lowest production for the state since 2004 if realized.

According to Michigan Farm Bureau Field Crops Specialist Theresa Sisung, while USDA expects per acre average corn yields to actually increase by 2 bushels from 2018 levels to 155 bushels per acre this year, there were 250,000 less acres actually planted due to rain delays in May and June.

While farmers were anticipating dismal yields, Sisung said the October report is a sobering reality check on the overall impact of weather challenges that have plagued the 2019 growing season.

“Unfortunately, Mother Nature can still make matters worse – much worse,” Sisung said. “Virtually every farmer in the state is watching weather forecasts 24/7, hoping for relief from above normal rainfall and a very late killing frost to allow many of these delayed crops to mature as much as possible.”

According to Sisung, the weather-related challenges in 2019 are reflected in all major Michigan row-crops and forages (see table below), with reduced yields, reduced acres and overall reductions in total production.

• Michigan sugarbeet growers anticipate a yield of 27.5 tons per acre, down 1.6 tons from last year. Total production is forecast at 3.99 million tons – a reduction of nearly 7% from 2018.

• Michigan dry bean growers expected their crop to yield 2,100 pounds per acre, a 300 pound per acre decrease from last year. Total production, at 3.93 million hundredweight, is down 15% from last year.